As I said in my last post, there was plenty to do during the first full day that I spent in WA. While I did sleep in a few hours compared to my normal work schedule (8:30 vs 5:30), considering the late arrival the night before I woke up early.

My friend, SSH, and her husband picked me up and took me to The Rock Wood Fired Pizza for lunch. We arrived right after opening at 11:30, and we soon ordered Garlic Cheese Bread, two pizzas (JH, her husband, and I shared the Flirtin’ With Disaster and SSH had the Founders’ Pie). The pizza tasted, without exaggeration, better than any pizza that I have ever had! It was delicious, and that is a gross understatement, haha. The pizza was good enough that 1) I wish we had them in California, and 2) I wish I could have taken the leftovers with me, but all the meals had been planned in advance. It was a great chance to re-meet JH. The last time we had seen each other was at their wedding a decade or so ago, and there is never any time to get to know someone at his or her own wedding. So, this was a good chance to get to know each other some more and a good chance to catch up with SSH, who I have known since I was 7.

After lunch, we headed out toward Mukilteo Lighthouse to visit the Diamond Knot Brewery and have a couple of pints while we continued to talk. The two of them recently started geocaching and using that as a way to get out of the house, explore, and have adventures. I think I may have asked them enough questions about their experiences and what geocaching requires because, as we were leaving, we found a cache within walking distance of the Brewery. Geocaching piqued my curiosity and it is something I want to explore in my own area. It is fascinating to find objects hidden in a specific place, which is sometimes surrounded by people that have no idea said object is there. It is like a hidden, underground world in the shadows, accessible only to those with GPS devices and a sense of adventure. It was wonderful seeing old friends and new, all the way realizing that the new friends have a lot in common.

After being dropped off, my host (KP), her daughter (JP), and I headed to Snoqualmie Falls, one of the few specific places that I wanted to see while I was in WA. Every time that I head up North, and I hope this isn’t the last time, I plan on seeing a little bit more. There are always new things to see and experience. 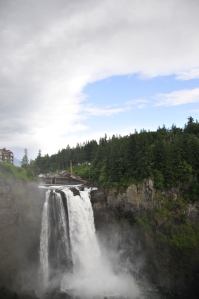 Anywho, right before arriving at the falls, it began to rain. As I mentally cursed Murphy and his Law for this and muttered, “Figures,” KP remarked, “This is Washington. If you don’t like the weather, just wait five minutes.” Evidentally, as I was about to learn, this was no exaggeration. The rain stopped five minutes after we arrived at the falls, after which I pulled out my camera and began to take some pictures.

Snoqualmie Falls is the largest and most impressive falls that I can remember seeing. While one or two falls from the Ten Falls Hike in Oregon’s Silver Falls State Park may be taller (I haven’t checked this, just my impression that comes from being able to hike behind some of the falls), the sheer amount of water pouring over the side of Snoqualmie was awe-inspiring and churned up a heavy screen of mist that the wind blew up onto the upper observation decks.

Unfortunately, the trail down to the lower level of the falls is closed for repairs until the Fall of 2013. So, all of the pictures were taken from the upper two observation platforms. I guess I’ll just have to come back from more pictures of the falls from below.